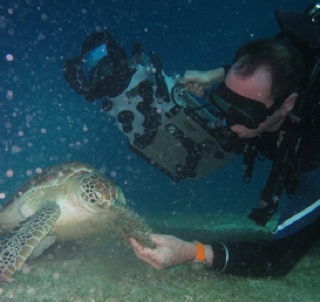 Passionate about all things marine, David Hannan works as a filmmaker, photographer, artist, educator, speaker and conservationist. In the water with a camera since age 14, he has over the decades won international acclaim for his startlingly beautiful underwater images of tropical coral reefs and other remote realms shown in screen productions of all kinds.

David first won international acclaim for his tropical coral reef images in his now classic best selling home video Coral Sea Dreaming first released in 1992. In 2014 David was awarded the Tourfilm Life Achievement Award for “his contribution to extending human vision beneath the sea and for his undying efforts to raise international awareness for the condition of the world´s coral reefs”.

He has created a visual record of tropical and temperate marine environments all around Australia, filmed extensively in Papua New Guinea and on expeditions to Antarctica and South Georgia Island. He has documented coral reefs in the Coral Triangle and across the Pacific Ocean with Tara Expeditions and filmed and worked in close collaboration with Rob Stewart on his acclaimed documentary Feature Films: Sharkwater, Revolution and Sharkwater Extinction. He was the major media partner of the Protect Malpelo Initiative in the eastern Pacific Ocean and the principle underwater photographer on Yann Betrands world acclaimed Planet Ocean.

David launched his first media production company Coral Sea Imagery in 1988 which was based in Townsville, Queensland. Over the next decade he filmed for and produced many notable award winning programs on the marine world including; Sex on the Reef, Eye on the Reef, Watery Creatures, Australia’sMarine World, Serenity, Raptures , Coral Sea Dreaming, Living Edens and the Shape of Life . In 2001 he formed a joint venture with ProCam in Brisbane Australia and went onto to film and produce the award winning 6-part TV series Undersea Edens. David was the principle u/w cinematographer on Lynette Wallworth’s Coral: Rekindling Venus, which screened at full dome cinemas around the world. David has supplied visuals for countless art and event projections such as the dance performance piece Okeanos.

Since 2010 David has shot and produced an extensive range of Virtual Ocean Display programming which feature on his Coral Sea Dreaming Ocean Channel. Dave is renowned not only for his filmmaking, but also for the conservation impetus that is activated by his films. It’s an inspiration and driving force behind his work. In 2010 David Hannan founded the Ocean Ark Alliance, a not-for-profit organization which for the next 10 years supplied license free media globally to hundreds of entities, initiatives and individuals of all ages to help foster awareness about the major issues confronting our marine world and the extinction of marine species.