Charlie is a long-term friend of David Hannan, with decades of collaboration in coral reef conservation work, publications, film projects and activism.

“Charlie is my most important mentor, and my science bible when it comes to reefs,” Mr Hannan said.

“This memoir is a precious insight into the brilliant mind and visionary heart of the planet’s most distinguished coral reef expert.” 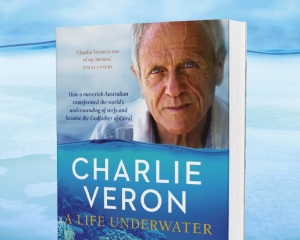 Charlie has dived most coral reefs in the world, filled prominent director roles in Australia’s most notable marine institutes including the Australian Institute of Marine Science, and has named more coral species than anyone in history.

Penguin Random House describes Charlie as “a maverick Australian who transformed our understanding of coral reefs” with the memoir penned as “exhilarating, eye-opening, provocative, funny and warm…an inspiration to the young and the young at heart.”

As A Life Underwater reveals, Charlie’s love of marine life started at six. In his early twenties he joined the frontiers of scuba diving, exploring wild coastal areas that were largely ‘off the map’. What followed was a rich career as a self-taught coral specialist; a field he revolutionized.

“His discoveries include an original concept of what a species is, and the mechanism that drives their evolution – matters that lie at the heart of conservation,” the book’s description reads.

As a young, wayward scientist, Charlie embarked on a largely untethered journey of discovery that revealed to the world the importance of reefs to ocean ecology, and the critical need to protect them.

His risk-taking and associated groundbreaking research proved the importance of safeguarding scholarly independence; something he continues to call for as the debate over climate change, reef depletion and management continues to rage.

Charlie has been hailed by David Attenborough, proclaimed a second Charles Darwin, and described by famous Australian conservationist Tim Flannery as “one of my heroes”.

But A Life Underwater is not just science. It’s a deeply personal reflection on life, love, loss and grief. It’s at times funny, other times emotional, and ultimately an inspiring call-to- action for us all.

“Charlie Veron isn’t just a coral scientist, he’s a pathfinder, a scout who’s been sending back dispatches on the future of the planet for decades,” states famous Australian author Tim Winton.

“If ever there was a moment for Australians to listen up and act on what he’s learnt, it’s now.”

Purchase book or find out more via Penguin Books